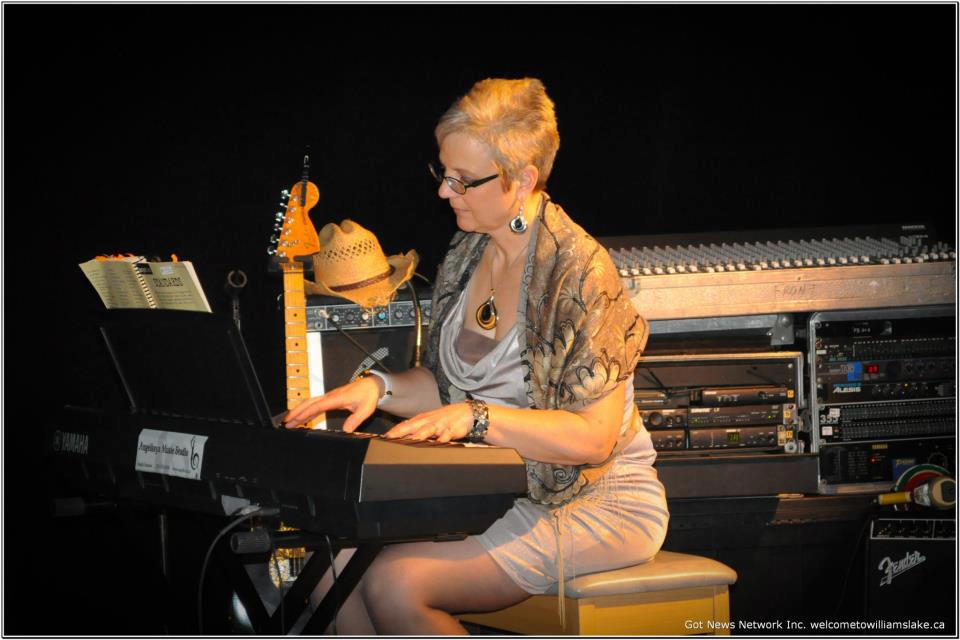 Harmony- to blend many different sounds into one overall pleasing sound

Angela Sommer has been playing piano and singing since she could climb up on a piano stool.  Her first piano was an old black thing with chipped keys, probably from her grandparents. Growing up in Germany, music instruction was part of the curriculum.  “Whenever my teacher introduced a new song she got me to sing it, which my classmates didn’t appreciate”.  Angela remembers getting up to sing at church on Sunday and thinking, “That microphone is bigger than me, it’s on a stand and I’m going to have to get it down somehow”.  Music was always part of her life.

She began lessons at age six.  When she changed to a different teacher associated with the University, she began taking lessons at a school that only taught music.  This was in addition to attending regular school. In Germany, you decide in grade four if you are going to go to trades school or University (grade 13). Nine years of schooling is compulsory in Germany.  Angela chose to attend a school that specialized in language, arts, and music.  She chose to enroll in 5 plus hours of music instruction daily. The theory and history components of the program compare to what Canadian students receive in the Royal Conservatory of Music.

Angela’s first music teaching job was at age 15.  She received $20\hr.  This helped pay for gas for her moped and allowed her to be able to travel.  Angela always wanted to be a music teacher.

After graduation, she travelled to Canada. She joined in choirs because “it was something I’d always done”. She was a member of The Vancouver Bach Choir and The Cowichan Musical Society.

After the birth of her first child, Angela decided to stay at home and raise her.  She had just quit her job, when she received a call from a friend that ran the piano department at Carillon Music in Surrey.  They needed a music teacher for 3 hours on Saturday.  She taught for one year before moving to Spokin Lake.  After moving she became involved in the church where people heard her sing and play.  Soon people began asking for lessons.  At first she taught in her living room.  Her husband and kids were banned to the basement to be quiet.

After her third child started kindergarten, Angela took on more students.  Lessons were taught in people’s homes and a rented room at the 150 Mile school.  When Angela and her family moved to Borland Valley, she began teaching at home and 2-3 days in town.

Angela’s students range from 3-80 years old.  Angela believes everyone can sing.  Everyone is accepted.  If you don’t sing, you miss out.  Because of her training and how she grew up, Angela encourages her students to the best of their ability.  If she thinks they can do more, she encourages them to.” I would hate to see someone walk out because they felt they weren’t good enough.”

Angela has helped kids that are in bands and with acting.  Some go on to write exams in RCM and pursue post-secondary education in music, but there are few like that.  Angela says she is not in the business of creating professionals.  Seeing people grow and develop where they wouldn’t on their own is rewarding.  She helps her students develop the tools to perform without showing fear.  “In a way, terror becomes your friend.  They are able to deliver a performance with spunk and pizazz.  She wants her students to sing at 50 or 60 and enjoy it.

She has also worked with individuals to improve vocal technique.  They are short term lessons to help voice projection and pronunciation.

Angela says music is the ultimate in multi-tasking.  You need to do layers of things simultaneously-time, pitch, words, rhythm, sound and harmony.  And if you are playing piano, you need to know what he lines/dots on the page mean and how to read the notes while doing the above.  Angela says music is good for the brain and very important.  Studies have shown that when electrodes are placed on the brain the entire brain lights up.  Music can be used to create an atmosphere using harmony. “Sound is more powerful than a picture”.  Harmony can be used to create many effects and emotions-pleasing, positive, sad, or disharmonic.  It teaches discipline- the more mileage put in practicing, the better the result.  Natural talent alone is not good enough.  To tell a musician that they have talent is almost offensive.  Nobody sees the thousands of hours put in to becoming that good.

Angela teaches because she enjoys working with people.  She had amazing teachers who put their heart and soul into her.  That’s what she wants for her students.