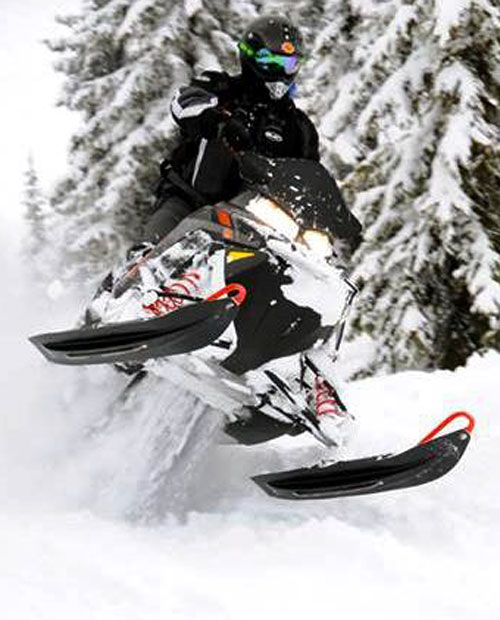 When a lot of people think of snow, they think winter tires, cold, and shoveling. I have to admit I’m one of those people. As a kid growing up in the country, I loved snow. The first snowfall meant building a snowman, snowball fights and snowmobiling on the trails and later, when the ice froze, on the lake. Snow to Mark Snowball, President of the Powder Kings Snowmobile Club, means heading up to Yank’s Peak.

In 2012 the club was in danger of folding. Mark asked the question “What’s involved in being a president?” The Powder Kings hold a Partnership Agreement with Rec Sites and Trails BC to groom the trails. The Powder Kings are responsible for grooming/ maintaining trails, signage and clearing the trails in the winter. Mark knew that if the club folded, they would lose their agreement. So, he let his name stand.

When Mark took over as president, the club owned a grooming machine they affectionately called “Paris”. The first time he went out grooming, it took from 8:30a.m. to 6:00 p.m. plus the 3 hour drive. It was a thankless job! The “old girl” had levers-no steering wheel, only 3 speeds, and you only got into third gear on a downhill slope. Grooming with “Paris” was an amazing feat for the club.

In the 2014/2015 season, after grooming with “Paris” for 2 years, Mark thought things needed to be stepped up. They had money in the bank so the club decided to buy a new groomer from the All-Cat dealer. They had approximately 2/3 of the money for the purchase and decided to fundraise the rest. By the end of that season the groomer was paid off. Each season the club spends approximately 240 hours to groom 500-600 km. This new machine made things so much easier.

The club is thankful to Jeff and Debbie Garten, who allow them to park the groomer on their property at Keithly Creek all year round. They also accommodate the fuel tank that shows up in the fall. Jeff does 80% of the grooming of the trails. The Powder Kings are one of the furthest clubs away from their trail so Mark and Laurie Snowball are very grateful for his help.

Mark has applied for a grant from Northern Development Initiative Trust to upgrade the Safety Cabin at Yank’s Peak, trail brush and upgrade, and upgrading the parking lot below the cabin. The cabin was built in the 1990’s and was in dire need of an upgrade. It is in a non-motorized area of Yank’s Peak. The original cabin was prefabbed and flown up the mountain. After they received the grant from NDIT, they held a summer workbee. All materials, crew of 13 and the carpet layer where flown up to the cabin. They refloored, installed a new airtight wood stove, added new railing to the cabin, and a new roof to the outhouse. Mark says the projects have really paid off. There is respect and pride from the club members. The cabin is now cozy, warm and welcoming.

The Safety Cabin is important to the club because it is the home base at Yank’s Peak riding area and equipped with first aid supplies, wood stove and shelter when conditions change, and shelter is needed.

Each year the number of members increases. There were 13 members when Mark started as president. Last year they had 180 members. Families are now involved in the club. Ladies are becoming interested in the riding. Mark’s wife, Laurie and daughter Maryclaire both ride. Laurie organized a Ladies Clinic 2 years ago that was very well received. She arranged to have a pro-rider teach the ladies. All 12 spots were filled with more interested ladies added to the waiting list. The younger generation are getting involved as well. This is thanks in part to pro riders like Hoyer, Manachuck and Turcotte.

The Snow Show and Groom for a Day are the only fundraisers the Powder Kings do. The Snow Show kicks off the riding season. At Snow Show they sign up members, sell snow passes and hold a show and shine. It only costs $250 to sponsor Groom for a Day. The first year the club had 10 sponsors, but that number is on the rise.

The Powder Kings hold about 6 events yearly. Some rides are Fun Day, Horsefly to Likely Ride, Horsefly to Ten-ee-ah Ride, Chimney to Ten-ee-ah Ride and the Sweetheart Ride. The Cariboo is fortunate to have 3 great mountains within 1 1/2 hours of Williams Lake. There is Green, Blue and Black terrain on Yank’s Peak. Mark and Laurie stressed for safety you should ride with someone that knows the trails and purchase your snow pass or you could be turned back by a CO. Mark and Laurie talked about the Rainbow Range – a must ride and truly a hidden gem!

As we finished our interview Mark said, “You really need to ride in the Alpines, then you’ll get why we ride”. Thinking I’ll take you up on that offer Mark, I might just love snow again!