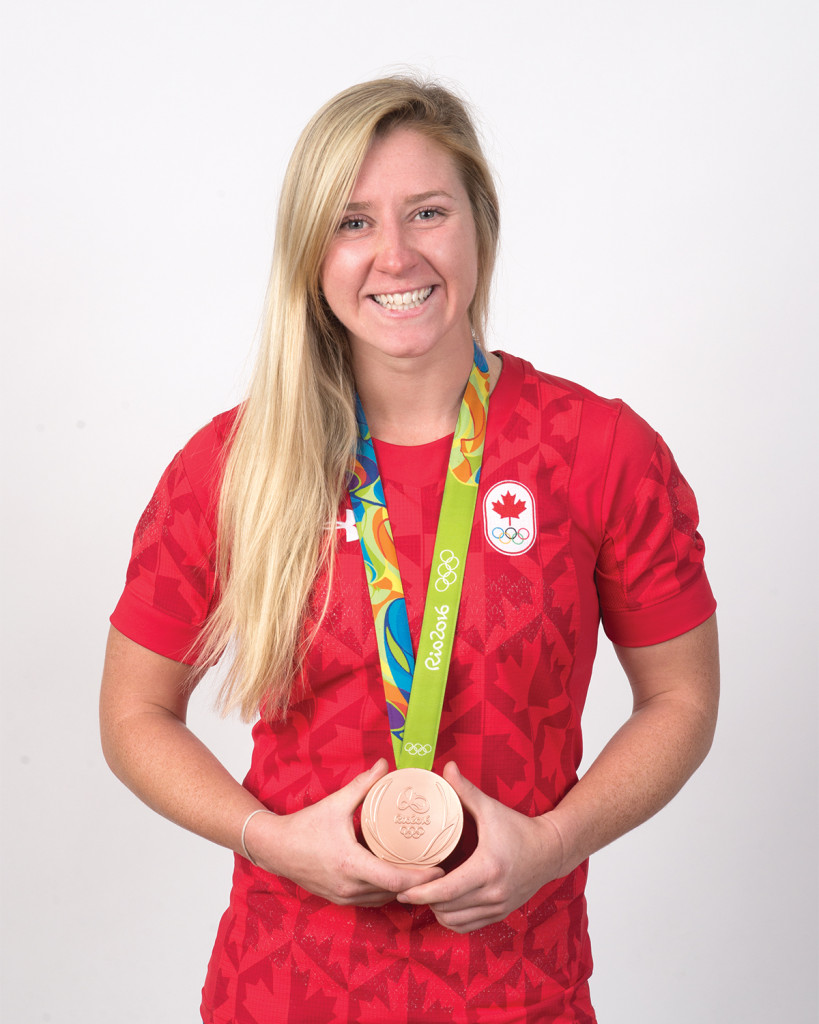 The energy that our feature personality exudes is infectious. Who better to be our personality for our Motivation issue, than a young woman who has motivated herself into an Olympic medal? There is no doubt that Kayla Moleschi is a Williams Lake girl. Born and raised here, she made sure anytime she was interviewed on the world’s stage, that they knew where she was from.

As our interview was almost two hours, there are a lot of details that I am unable to go into for this article, but suffice it to say I got an education in rugby.

Kayla started playing rugby in grade nine but that was not her introduction to the sport. In grade seven, her parents moved near the Ottoman rugby fields and she would spend a lot of her free time at the field just watching. A couple years later, a friend named Sydney Pritchard, whose family are rugby enthusiasts, introduced her to the sport that now is the main focus of her life.  For the next four years, Kayla was an avid player, playing any chance she could get, even to the point of the team having a modified jersey with longer sleeves so they could play in the cold. Her Columneetza team placed third in the provincials in her last years of high school. Kayla loved the coaching on that team from Coach Mauro Calebrese, and loved that their team was always the underdog; because of their size they were severely underestimated by their opponents when they played out of town.

After high school, Kayla took a couple years off from school (but not rugby!) to figure out what she wanted to do with her life, and ended up taking a semester at TRU here in Williams Lake. You almost need a score card to keep track of everything she has done with rugby, to get where she is now. She had a plan and that was to play this sport at the highest level she could. Through those early years, there were tryouts after tryouts at various locations, and as Kayla said “I spent a lot of time on a greyhound by myself.” These tryouts put her in front of the scouts, and she was picked up by team after team. She paid for herself to go to Sevens camp (rugby played with seven on each team) in Vegas, and didn’t get picked for the top two teams, but was picked for an open team which ended up winning the Open Tournament. She then had the attention of the Canadian Olympic Coach; John Tate told her she had a lot of raw talent and introduced her to the coach of the University of Lethbridge rugby team, where she ended up getting a small scholarship to play and study Kinesiology. While there, she was selected to go to Dubai to play a tournament, and almost right away the Olympic Coach asked Kayla to come to Victoria to train full time for the Olympic team and make her dream a reality.

She has been in Victoria training with this team for about four years, and is amongst the pool of 25 women, then paired down to 12 who are chosen for each tournament including the Olympics. Kayla has only missed the cut once and that was due to a back injury.

Kayla now considers herself a professional athlete, as this is all she does and makes a living doing it. She says she’s not going to get rich but she is living her dream. When I asked if she has her sights set on the next Olympics in Tokyo, she said she is not looking that far forward yet as there are about six tournaments all over the world every year between now and then, and unlike a lot of sports, you have to make the team for every one of them.

As our issue is about motivation, I asked her what her motivations are. She uses a lot of positive self-talk, has great support from her family, and being a team sport, she gets lots of encouragement from her fellow teammates. She wants to be the best in the world, and every day that pushes her along that path. She says you have to be prepared to make sacrifices and push through the pain, and as much as you want to sleep in, you have to get your butt moving every day.

She goes back to training again in October, but until then, she will be hanging around close to home, so if you get a chance to see her, let her know how proud we are to call her our hometown Olympian.