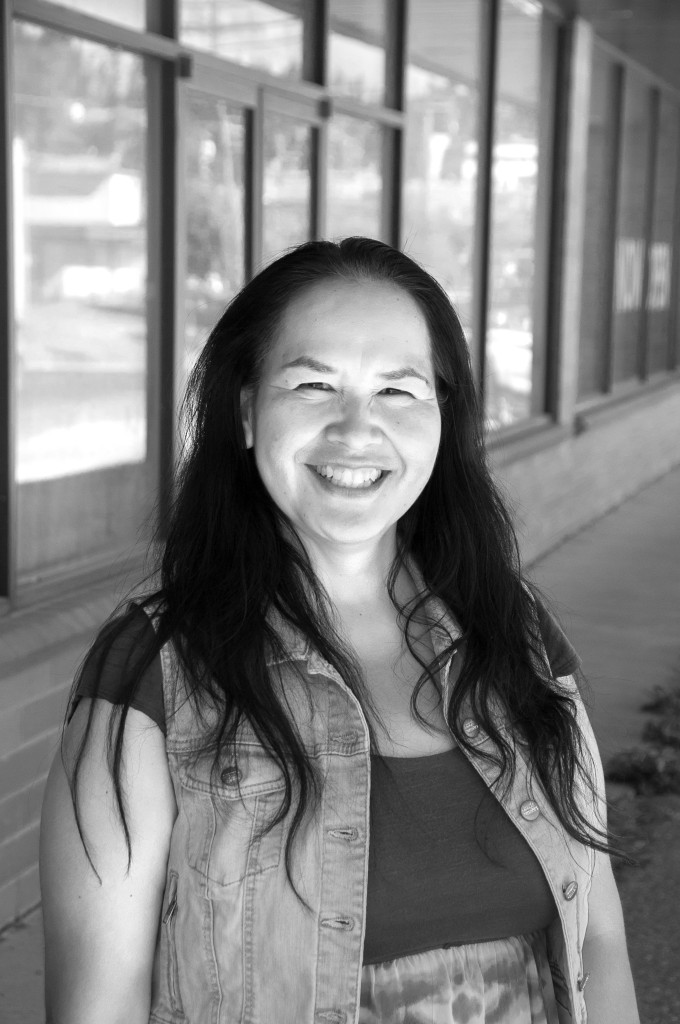 The up and coming, Cariboo’s very own talented actor, Lana Wright, is this month’s feature. Lana’s new-found career as an actor has her doggedly working at breaking into the industry after a very long road. Born and raised in Smithers, she is a proud member of the Wet’suwe’ten nation. Lana married her sweetheart, Steve Wright, in Hazelton and they have 2 children, Michael and Jason.

Lana obtained a Human Service Worker Certificate in 1990, a Bachelor of Education Degree in 1996, and a Diploma in Education: Visual and Performing Arts in 1998, before making her home in the Cariboo. Lana taught in Williams Lake as an Education Coordinator, and later, a substitute teacher, and she also taught children on Stone Reserve and Anaham Reserve for 12 years.

Her whole life, Lana dreamt of being an actor. As a young girl, Lana distinctly remembers watching the Oscars and dreaming of winning one herself. Her first experience with stardom was when she was fourteen years old; Beachcombers star, Marianne Jones, hosted a workshop for the youth on her reserve in Moricetown. Marianne was very impressed with young Lana and signed an autograph writing, “See you on stage soon.” The internal desire to be an actor was officially born.

It would be sixteen years later, in 2003, that Lana would take to the stage in her acting debut in Tomson Highway’s Rez Sisters as Annie Cook on the Williams Lake Studio Theatre’s stage. In 2008, she was Dusty Fairweather in playwright, Roy Teed’s, Har. Four years later she was the narrator, Arnis Boheme, in William Gleason’s, The Clumsy Custard Horror Show, followed by Potato Dreams, where she portrayed Spirit, keeper of the land and the Potato House.

In 2009, the tragic loss of Lana’s young nephew prompted her to make the most of her life, and wonder, “What am I waiting for? I have to live this dream.” While shopping at the Pine Centre Mall in Prince George, she noticed an information booth about a private school called the New Image College of Fine Arts in Vancouver. She bravely approached the Director of the acting program, Phil Granger, and set up an audition. At the audition, she was given Hilary Swank’s monologue from Million Dollar Baby to read. Lana recalls her audition; “I was so scared, my knees were shaking.” After thinking she totally bombed the audition, she was surprised when the panel said, “When can you start?” She was scheduled to begin her training in September of 2012.

Along with attending auditions, Lana completed a project called Homeless Paul and the Golden Medallion, and spent 5 hours in the make-up chair to be transformed into an alien for the short movie which is going to festival. She continues to study her craft with members of Greasy Bannock Productions on Thursdays, meets with another group on Fridays to study Oedipus, and on Sundays, she is studying Shakespeare with Kevin Bennett who worked at the Shakespeare’s Globe Theatre in London, England. She also is applying to join the Aboriginal Ensemble Training Program with Full Circle: First Nations Performance organization. This program offers talks, workshops, development, and cultural activities. For example, the organization brought in Los Angeles actor, Robert Vestal, to teach a week-long intensive workshop about improvisational skills.

An actor never stops learning and training. Not only is this great networking, but it keeps the actor fresh and on their toes. Lana remarks, “This can be a very intimidating industry.” However, instructors echo words of wisdom for her to succeed, “Show up. Know your lines. Hit your mark.” Lana, after so many years, has made her dream a reality. “You live your life differently when you are living your dream. Everything is a possibility, even the failures. You have to get up, brush yourself off, and keep going. Never give up.”

Lana’s husband and two boys have been there all the way, and are very supportive of her new journey, as are her Mom, Dad, brothers, nieces, nephews, in-laws and friends. Lana would like to acknowledge all those affiliated with the Williams Lake Studio Theatre and the Potato House for giving her the chance to act. As she continues to break into the industry, she will be forever grateful to those offering prayers, encouragement, and support.

As Lana pursues her career as a character actor, she is excited about the prospect of what the future holds and will be open to any possible opportunities that come her way. She is creating an acting profile for herself with a new stage name, Taninli, which in her Wet’suwet’en language means ‘waterfall’.

Taninli’s eldest son, Michael, is attending Capilano University, attending the Directorship in Motion Picture Arts program, and in a year, her youngest, Jason, will attend the same university to study Animation.

Through her work, she hopes to inspire others to aim high and fulfill their dreams. The future is not guaranteed. One must make every moment count, live the dream, and become the person you were meant to be, a person full of life, love, and light.

If you want to see Taninli’s short film, friend her on facebook; Taninli Wright. One day when we see Lana on the big screen as Taninli Wright, we can all be proud of our Cariboo girl who has always been a star at heart.